Three more sleeps! Join us for the first virtual seed swap and to talk about all things seedy on Saturday March 6 at 1:00 pm by Zoom!

Go to seedsgrowfood.org for more information and to register!

You only have to register once and you can attend any or all of the four events in this month! http://seedsgrowfood.org/

For 2021, KASSI will be hosting a session on seeds and seed-saving on the second Thursday of each month at 1 pm, as part of the Rideau Thousand Islands Master Gardeners online series, Ask a Master Gardener.

February 11, 2021 – Cathy Christie, KASSI Chair and Master Gardener in training and Kathy Rothermel from Kitchen Table Seed House and KASSI Board Member will be sharing tips on starting plants from seed. You are welcome to ask any and all gardening questions in this forum.

Go to the Master Gardeners’ website for details of the full program and how to register.   https://rideau1000islandsmastergardeners.com/upcoming-events

When registering on the Eventbrite site, you can sign up once for the full year-long series by clicking on the link at the bottom of the text, or you can select particular dates using the “select a date” button near the top of the page.

The Master Gardeners’ website is a treasury of gardening discussions, advice, and other upcoming gardening presentations online.
In the blog section, you can read summaries of sessions held in 2020 and 2021.

cc Mark Gerretsen, MP for Kingston and the Islands, <Mark.Gerretsen@parl.gc.ca>

I am writing on behalf of the Kingston Area Seed System Initiative (KASSI), a non-profit organization that was founded by local farmers, backyard and market gardeners, and concerned community members.  Our objectives are to increase seed sovereignty, and thereby, food sovereignty and food system resilience, for the Kingston region.  We promote healthy, local food and seed production by

We are very concerned about the proposal to amalgamate five seed organizations in Canada into one organization, Seeds Canada, and the consequences of this amalgamation for the seed system in Canada.

We share the urgent concerns expressed in an analysis published by the National Farmers Union in July 2020.

From the NFU analysis:

“Canada’s agriculture is seed-based, and farmers are greatly concerned about the proposed changes.

No one can deny the importance of seed – not only to farmers and agriculture, but also to food security and society at large.  The Seed Synergy groups are positioning themselves to not only influence, but replace the public regulator.  The implications of our seed system being controlled by agri-business corporations are serious.  If Seed Synergy’s amalgamation plans succeed, the independent seed grower will soon be a thing of the past, and democratically accountable public regulation process will be turned inside out, with self-interested corporations regulating farmers instead.”

An examination of the proposed board structure for Seeds Canada sets off alarm bells about the eventual loss of influence of seed growers in the organization.

Again from the NFU analysis:

“The amalgamation proposal will transfer regulatory powers to Seeds Canada.  For decades, the CSGA (Canadian Seed Growers Association) has been responsible for enforcing government regulations for pedigreed seed production under the Seeds Act, Canada’s original consumer protection legislation, which was designed to protect farmers from unscrupulous seed sellers.  The proposed Seeds Canada structure would give the seed corporations on its Board legal authority over delivery and enforcement of these and other seed-related regulations.  The choice of name, Seeds Canada, appears intended to enhance its legitimacy by encouraging the assumption that it is a government agency like Health Canada.  Seeds Canada’s proposed bylaws outline the new organization’s membership types, voting rights and board composition.  Its structure would sideline seed growers nationally and provincially while promoting seed industry corporations.  Seed growers and grain farmers would suffer the most if this comes to pass.”

The proposal calls for changes that will, over time, increase control within Seeds Canada by seed trade members other than farmers — companies that make money from seed at any point in the system — a sector that is dominated by enormous transnational, multi-commodity corporations like Bayer, Cargill, BASF, Limagrain and Syngenta.

We fear that creation of Seeds Canada will lead to seed growers becoming indentured workers, tied to contracts set by the corporations, but being the ones taking all the environmental and financial risks such as weather and insects.  (We are reminded of the way that many American chicken farmers are tied to contracts that bind them to corporations that sell them the chicks, feed and other inputs, and then buy the finished chickens, leaving the farmers with a very narrow margin.  This situation is not at all sustainable.)

Corporate-influenced seed regulations in the European Union led to the demise of small seed companies in Europe.  When regulations were proposed to make illegal the practice of backyard gardeners trading seeds with each other, Europeans realized seed industry regulation had gone too far.  KASSI wants Canadians to wake up before we reach that stage here.

We realize that the vote on the Seeds Canada proposal underway this month is outside the control of the federal government.

However, we call on you, as Minister of Agriculture and Agri-Food, to be vigilant and prudent in your department’s dealings with the seed trade, guided by what is best for Canadian eaters and farmers, not corporation shareholders.

Whoever controls seeds controls food.  We want control of seeds to be in the hands of hundreds of thousands of Canadians, through seed companies of all sizes and through individuals with their own stash of saved seeds.  We also want the federal government to lead in restoring a robust network of public seeds research.

Such a dispersed system of seed stewardship increases the resilience and self-sufficiency of the Canadian food system — a critical responsibility of the federal government.

We saw this spring how large numbers of Canadians responded to the uncertainty of the pandemic by wanting to plant gardens — only to find that the demand for seeds outstripped the supply.  That shortage reminds us that we need to keep the seed supply in the hands of individual Canadians and farmers, through many, many seed suppliers, and supported by publicly-owned seed research.

We welcome discussing our concerns further with you or your staff.

Of course we will be doing this safely and socializing at a distance!

The KASSI LIVING SEED COMMONS is a collection of locally adapted open-pollinated seeds. Open-pollinated plants grow like their parents. They produce seeds that can be legally grown, saved and shared. They are the foundation of our food system

Did you know that you can save viable bean seeds from just one plant! The same is true for squash, tomatoes, lettuce and most of the flowers in the KASSI Living Seed Commons!

Our seeds and seed collections are available on a sliding scale donation.   We don’t sell our seeds because we acknowledge and respect that they are living beings. We believe that the price on a seed packet represents the work that goes into growing, harvesting, cleaning and packaging the seeds before they get to you. Local seed companies usually request a minimum of $3.50 per seed packet for their expertise and the labour that goes into producing high quality local seeds that grow well right here where we live.  We encourage you to support them!

We are a very, very small non-profit working with a shoestring budget especially since Seedy Saturday –our major fundraiser- was cancelled.  We rely on your donations and our amazing volunteers to help us grow, harvest, clean and package these “Seeds of Hope”.

The “Seeds for Small Spaces” Collection includes 5 multipurpose bush bean seeds, lots of lettuce seeds and one cherry tomato suitable for growing in a container. Suggested donation for this collection is $5.00

Seeds for other varieties of beets, beans, lettuce and kale will be available as individual packets.  Individual tomato seedlings will also be available.  Suggested donation for these items is $3.50 each.

We will have a donation jar on site or you can use Pay Pal to make your donation!  Instructions for how to use the Pay Pal site are available on our website (http://seedsgrowfood.org/donate/)

WE APPRECIATE WHATEVER YOU CAN GIVE TO SUPPORT OUR CRITICAL WORK!

WE LOOK FORWARD TO SEEING YOU SAFELY AT A DISTANCE THIS WEEK-END!

We hope that you can find the peace and joy that comes from planting seeds and connecting with the Earth in these turbulent times.Edit

Join us today at 1:00 for the Rideau Thousand Islands Master Gardeners Virtual Call-in. Bring your questions! Join in the fun!

KASSI is partnering with the Rideau 1000 Island Master Gardeners and Loving Spoonful to transform our local food and seed systems.

We know that producing food and saving seed are fundamental human rights.  The COVID-19 crisis is laying bare the vulnerabilities and inequities of the industrial food system.  To increase the resilience of our food system, we need to grow a LOT MORE food and seeds locally!  And not just in rural areas.  We can grow food and seeds almost anywhere — window sills, containers, balconies, backyards, front yards and community gardens.

We need #Garden4Good Ambassadors from every neighbourhood, every age group and every background to inspire, support and connect with their neighbours so that we can grow more local food and seeds!

Please fill out this form to let us know how you can help!

You can also join the #Garden4Good YGK Facebook Group.  It was launched to bring people together who have a range of knowledge, skills and resources so that we all feel supported.  There are weekly live Q&A zoom chats with Master Gardeners, a weekly small group vegetable garden coaching call, a forum for exchanging seeds and plants with your neighbours, and a hub for sharing the harvest!

April 26, 2020: Great news! Community Gardens to reopen in Ontario in The Kingston Local! Thanks to everyone who made it happen! We want everyone to grow food and seeds in community Gardens and everywhere else they can! 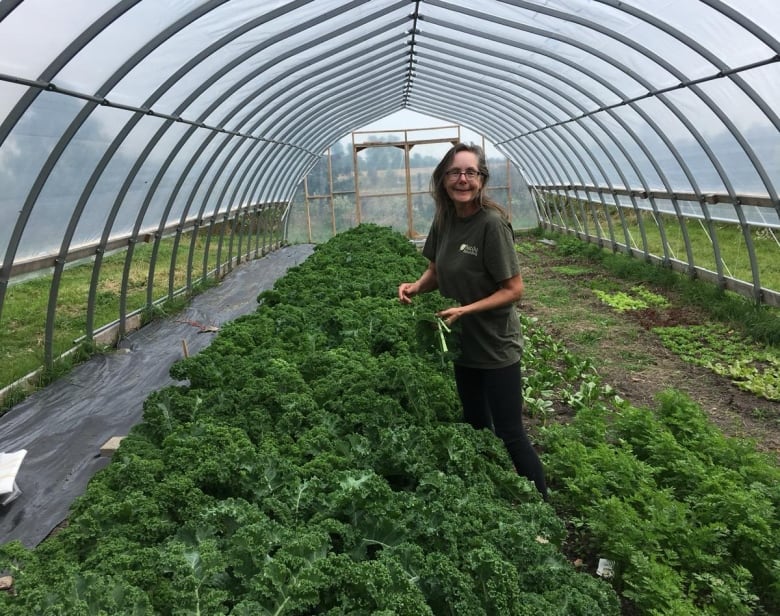 April 15, 2020:  Community groups ask locals to plant ‘gardens for good”  in the Whig Standard  and Kingston This Week

Whether you’re starting a vegetable garden, pollinator garden or planning to wildscape your yard- Joyce Hostyn shares a few tips on how to start a new garden bed in today’s session! .
Bring your questions!

In the future they will be featuring Q&A conversations, mini-workshops and virtual tours with Kingston & Thousand Islands master gardeners & friends.

When: Every Thursday afternoon from 1-1:30 pm starting Thursday, April 9th.

Where: Virtually via Zoom. Zoom is easy to use. You don’t even have to download the Zoom app, but it’s better if you do: http://zoom.us

Registration: Register in advance for Ask a Master Gardener (you only need to register once and can then join in any week you’d like)

After registering, you’ll receive a confirmation email containing information about joining the call.

During this time of limited outings, gardening is more important than ever. A garden is a place to find solace, joy, wonder. A garden gifts us offering delicious things to eat. A garden provides sanctuary to birds, pollinators, bees and more. To plant a garden is to bring into being a more beautiful future.